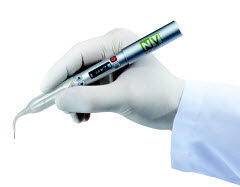 We now have the latest equipment in early decay detection. DIAGNOdent is a mini-laser that we scan over the teeth grooves to help find hard to detect decay. Normally there are two methods of detecting cavities, visual examination with a dental instrument and bite-wing x-rays. But due to the nature of narrow grooves in back molars and overlapping teeth, some decay can be difficult to detect in the early stages. Also, over the last 30 years since fluoridated water has been the norm in most communities, children's tooth enamel has gotten harder and more dense, making it more difficult to detect early decay on an x-ray. Thus, decay can slowly progress in unsealed grooves until it reaches the inner layer of the tooth, the dentin. Normally most x-rays will pick up decay at this stage, but due to the extra dense, fluoride-hardened enamel, the decay can be obscured. That is why sometimes when we clean out the decay, it can appear to be a pinhole on the surface, yet we may end up finding a crater underneath. 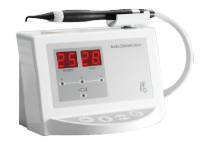 DIAGNOdent acts like sonar in that the laser beam is bounced back to the detector at a different wavelength when a hidden soft or hollow area is detected in contrast to sound tooth structure. This detector will show a high digital numeric reading when decay is detected as well as an audible alarm.